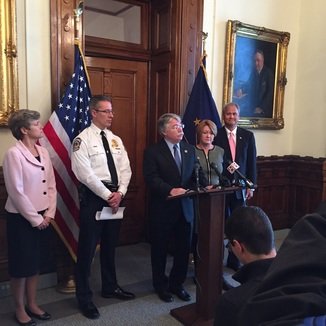 The nonprofits are tasked with distributing naloxone to first responders in counties identified as high need or high risk, though their coverage ability extends statewide.  Law enforcement agencies in the most underserved counties are the initial target for the funding.

According to ISDH, opioid painkillers and opioid-based heroin caused at least one third of the drug overdose deaths in Indiana in 2013. Provisional data from ISDH suggests that drug overdoses rose again in 2014, with about 1,150 deaths and more than 12,000 non-fatal hospital admissions.

“Indiana is in crisis mode as it responds to disastrously high rates of drug addiction and overdose,” Zoeller said. “Law enforcement has taken an active role in triaging this crisis by administering naloxone when officers arrive first on the scene of an overdose, when mere minutes could be the difference between life and death. Ensuring all of Indiana’s first responders are trained and ready to save a life with naloxone is a critical and necessary response to this public health emergency.”

Zoeller established the grant program in October 2015 to help encourage and create an opportunity for all first responders in Indiana to get equipped with the life-saving treatment kits and trained to administer them. The grant program is paid for with settlement funds received by the Attorney General’s office for off-label and deceptive marketing by pharmaceutical companies.

Overdose Lifeline Inc., a nonprofit that works to raise awareness and eliminate the stigma of drug addiction, is receiving the bulk of the award at $75,000. The nonprofit will work directly with first responder agencies that express interest in receiving naloxone training and kits, based on greatest need.

“Overdose Lifeline’s primary goal is to put naloxone into the hands of law enforcement officers, first responders and others who have the greatest chance of saving lives,” said Justin Phillips, founder/president of Overdose Lifeline and mother of heroin overdose victim Aaron Sims. “If just one life is saved by a first responder administering naloxone, than our efforts are worth it.”

Indiana Naloxone Project, based in Bloomington, will receive $25,000 and serve Brown, Jackson, Monroe and Lawrence counties.

The Health and Hospital Corporation of Marion County will receive $27,000 to specifically provide naloxone refill kits to Indianapolis Emergency Medical Services (IEMS), Indianapolis Metropolitan Police Department (IMPD) and the Indianapolis Fire Department, which serve not only Marion County but also the surrounding counties of Boone, Hamilton, Hancock, Shelby, Johnson, Morgan and Hendricks.
IEMS and IMPD were the first in the state to pilot a naloxone training and administration program specifically for law enforcement, after the Legislature granted civil immunity to first responders who administer naloxone in the course of their duties. Since the initial training in March 2014, nearly all IMPD officers have been trained on the proper use of naloxone, and the department has saved nearly 150 lives.
“This effort is a great example of the first responders true desire to protect and serve,” said IMPD Deputy Chief Bryan Roach. “We are grateful for the consistent relationships and hard work of all our partners in making this lifesaving and life changing initiative work. We could not be more proud of the care and support demonstrated to those in need.”

First responders or law enforcement agencies interested in receiving training and naloxone kits from one of the three suppliers can find a map of service areas for the grant recipients and contact information here.