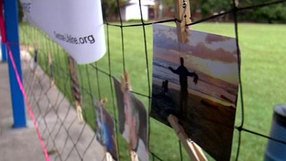 INDIANAPOLIS – There’s a new push to solve a growing health crisis that’s having a big impact on Indiana communities.

In just the first six months of this year, 50 people have died from overdoses in Marion County alone. Now, families personally affected by addiction are joining together with state leaders to bring attention to the problem, and stop the vicious cycle.

Justin Phillips, who is leading the effort, lost her 20-year-old son last year to a heroin overdose.
“I think the challenging part is that the kids aren’t aware,” Phillips said. “First of all I’ve been
told that the dealer’s not telling them it’s heroin. That they think it’s just another like oxycontin or pain medicine. Then once they’re hooked on it, which happens very quickly, they can’t get off.
“They don’t understand how to minimize the dose that they’re taking, and that’s how they overdose.”
Phillips says she’s drawing on her own personal loss to make a difference and save the lives of others struggling with drug abuse before it’s too late.

She launched a non-profit called Overdose-Lifeline, which provides families impacted by addiction with support and resources with the goal of bringing hope.