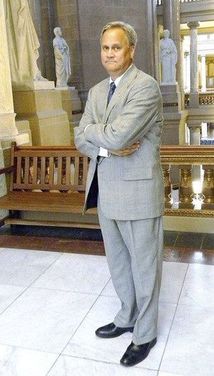 INDIANAPOLIS – Sen. Jim Merritt was out walking his dog one evening in his quiet, tree-lined cul-de-sac when a neighbor, Justin Phillips, stopped to
chastise him.

Phillips’ son, Aaron, a former high school quarterback raised in the same
affluent suburban neighborhood where the conservative Merritt raised his
children, had died of a heroin overdose a few months earlier.

“She said, ‘You knew Aaron. You knew he died. Why haven’t you reached
out to me?'” Merritt recalls. “It was like a smack on the head.”

Since that encounter nearly two years ago, Merritt has made heroin addiction a signature issue, and it’s likely to remain so as he travels the state building name recognition for what’s expected to be a gubernatorial run in 2020.

Once a champion of tough penalties for drug crimes, the Republican is now advocating a less punitive approach that emphasizes treatment over incarceration.

Merritt’s emphasis is timely, as the heroin problem dramatically worsens. Opioid-related deaths have more than tripled in Indiana in the last decade. Heroin-related deaths themselves are increasing twice as fast.

​Merritt also finds that the issue gives him a platform almost everywhere he goes, connecting him with people who share deeply personal experiences with drug addiction, overdoses and death.

“Every time I speak to a group, I say addiction is an illness, not a character flaw,” he said. “It resonates everywhere I go. I can’t walk into a room where there isn’t someone with a story about a friend or loved one lost to heroin.”

“The issue area that he’s chosen, or fallen into, is a good catalyst for someone trying to portray himself as a quieter, gentler conservative,” said Feigenbaum, who has known Merritt since his early days in office.

“And it’s something that all ends of the political and philosophical spectrums can agree upon,” he said.

Merritt, a 25-year veteran of the state Senate, has worked his way up to a policy-shaping role as majority caucus chairman. He’s earned accolades from the business community for pro-growth views and his efforts, as chairman of the Senate Utilities Committee, to hold down energy rates.

But he’s not been well known outside his Indianapolis district, and he’s hoping that a focus on substance abuse issues can change that.

Earlier this month, legislation that Merritt championed, and named for Phillips’ son, went into effect.

“Aaron’s Law” clears the way for addicts and their families to access naloxone, known by its brand name, Narcan, which reverses the effects of an overdose. It gives criminal and civil immunity to doctors who prescribe the drug without first seeing an addict.

While critics say the law enables addicts, Phillips defends it as a life-saving measure that may have saved her son.

Republicans, who in the past cut funding for addiction services while increasing penalties for drug crimes, overwhelming supported the measure. In the same session, they funneled millions of dollars into programs that steer addicts from prison and into treatment.

Phillips said those votes mark a major shift – of lawmakers acknowledging the depths of the opioid problem, which is fueled by easy access to prescription painkillers.

This heroin scourge, unlike those of the past, is spreading far beyond inner cities and into suburban and rural communities.

“Now it could be anybody’s kid,” she said. “Maybe it didn’t matter as much when it was just a small group of junkies living under the bridge.”

Merritt isn’t the only Republican focused on the issue.

And Republican Gov. Mike Pence is expected to announce soon a plan to combat opioid addiction with the appointment of a commission that will devise ways to reduce the supply of heroin and prescription narcotics and increase treatment options.

But Merritt may stand alone in seeing political potential in the struggle with heroin and opioid addiction.

“Jim Merritt is a ‘big idea’ guy,” said longtime political analyst Brian Howey, publisher of Howey Politics Indiana. “And in what may be a crowded field of candidates for governor in 2020, this is what he may need to distinguish himself.”

That 2020 race may seem a long way off, but political speculators are already penciling in a line-up of Republican aspirants to succeed Pence, if he wins a second term next year.

The opioid problem may help Merritt secure a place on that list, but he said the issue is one that all Republicans should prioritize, especially given its broad impact in communities rich and poor.

Earlier this year, the U.S. Centers for Disease Control and Prevention said opioid abuse among injection drug users could lead to severe outbreaks of the potentially lethal HIV and Hepatitis C viruses, like those in rural Scott County earlier this year.

The CDC followed that with a July report that said heroin use has increased dramatically across the United States. It found: “Some of the greatest increases occurred in demographic groups with historically low rates of heroin use: women, the privately insured, and people with higher incomes.”

Merritt knew the same trends were at play in Indiana, which has the 15th highest rate of overdose deaths.

Still, Merritt admits to his own failure to see warning signs.

He tells a story of visiting college campuses in late 2012 to promote a law he championed that gave minors immunity from arrest when seeking medical help for alcohol-related emergencies. The so-called “Lifeline Law” was meant to reduce binge-drinking deaths on campus.

A police officer told Merritt he should be more worried about heroin overdoses.

Merritt said those words didn’t register until his conversation with Phillips after Aaron’s death.

Phillips says Merritt’s advocacy has huge appeal to parents like her who’ve felt stigmatized after losing a loved one to addiction.

“It’s lonely and isolating,” she said. “It’s not like cancer. Nobody brings you dinner when your son dies of a drug overdose. They shun you.”

Steve McCaffery, executive director of the Indiana chapter of the Mental Health of America, also sees Merritt’s move to decision the issue as significant.

“Clearly — and sadly – addiction issues have been around for decades,” he said. “But now it’s affecting all segments of society. Whether you’re a Democrat or a Republican, it’s becoming more of a critical issue.”

Maureen Hayden covers the Indiana Statehouse for CNHI’s newspapers and websites.
Reach her at mhayden@cnhi.com