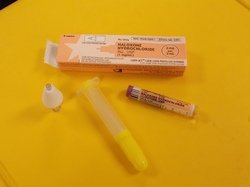 October 9, 2014 marked the one year anniversary of Aaron’s death by heroin overdose.  To commemorate, Overdose-Lifeline donated 37 kits of Narcan to the Indianapolis Metropolitan Police Department to help prevent such tragedies.  Read the text of WISH TV’s coverage below, or watch the full story here:

INDIANAPOLIS (WISH) – In April, Indianapolis Metropolitan Police Department officers began carrying Narcan, a drug that reverses the effects of heroin. However, Narcan was only used in the Southwest District as part of a pilot program.

On Thursday, those officers got 37 more Narcan kits. What makes this donation especially poignant, is it came from a non-profit started by a woman whose son died of a heroin overdose one year ago Thursday.

“So I’m here because last year on this day I lost my 20-year-old son, Aaron,” says Justin Phillips.

Phillips said she never thought she’d be standing in front of a room full of police officers in Indianapolis talking about heroin addiction.

“And I don’t think Aaron looked like a heroin addict,” she told the room full of Southwest District officers.

“Aaron was a good kid. He had a really big heart. A really talented athlete and just a really sensitive soul. And he just you know, made some bad choices,”  she says.

“It would have made a difference I do think in his case it would have. Absolutely. Everyone deserves a second chance, right?” she says.

After her son’s death, Phillips started Overdose-Lifeline, a non-profit raising money to buy Narcan kits for first responders. One spray can stop an overdose death in its tracks.

“It’s been very successful. We’ve used it 37 times since the end of April after the officers were trained. And everyone’s lived after being administered to it,” Deputy Chief Bryan Roach said.

Roach got the pilot program going in the Southwest IMPD district. Now 37 new kits were donated, replacing the 37 kits that saved lives.

Phillips said she wants her tragedy to become a lesson for the rest of us.

“Treat a challenge with drugs the same as you would treat cancer or any other chronic disease and do whatever it takes to get them help,” she said.

IMPD says the department is working to expand the Narcan pilot program. Deputy Chief Roach said most likely, by the end of this year, in the east district.

Back in August, 24-Hour News 8 reported two State Representatives are working on a law to mandate Narcan training for first responders in Indiana.