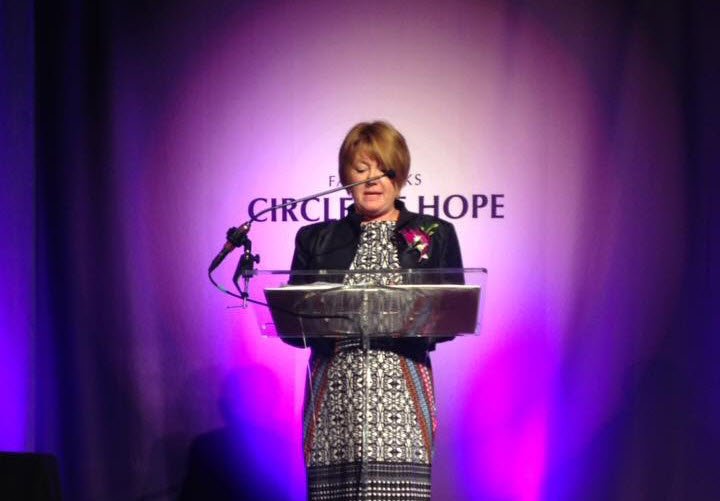 Phillips, a recovery advocate, founded Overdose Lifeline, Inc., to raise awareness of the opioid and heroin epidemic and provide resources for prevention. She started the nonprofit organization one year after her 20-year-old son Aaron died from a heroin overdose. In 2015 Phillips worked with state Sen. Jim Merritt on the passage of SEA 406 (Aaron’s Law) to allow for layperson access to Naloxone, a prescription medication used to treat narcotic overdoses in emergency situations.

While humbled by the recognition from Fairbanks, Phillips called it bittersweet. If she could change Aaron’s outcome, she would be anywhere else. Since she couldn’t, Phillips had no choice but to address a problem affecting so many families from every walk of life.

“When I became faced with the reality that my son Aaron was permanently gone from our lives, there was no possibility of comfort, so I chose to have the courage to speak up about the roles stigma and denial play in this disease of addiction – and for Aaron’s memory and all the others losing this fight,” Phillips said.
Even though Phillips has been in recovery from alcoholism since 1989, she was still too ashamed and in denial to admit to anyone that Aaron was using heroin. And she believes that contributed to his death.
“So I decided to start talking about it,” Phillips said. “My experience could save others. Too many are dying. This is really about their lost voices and their lost opportunities. I am here for Aaron and for the countless others.”

Along with helping to pass Aaron’s Law, Overdose Lifeline also developed the only prevention education program directly addressing opioids and heroin. They’ll be part of the Substance Abuse and Mental Health Services Administration’s Road to Recovery program later this year. Phillips also is in the process of earning a master’s degree in addictions counseling from Indiana Wesleyan University.

“There are many days I wonder about choosing comfort,” she said. “But there are lives at stake, and it is time this disease gets the attention it deserves.”

You can watch the video about Phillips, produced for Circle of Hope, at this link: https://youtu.be/JD19ehyYBdg or below.